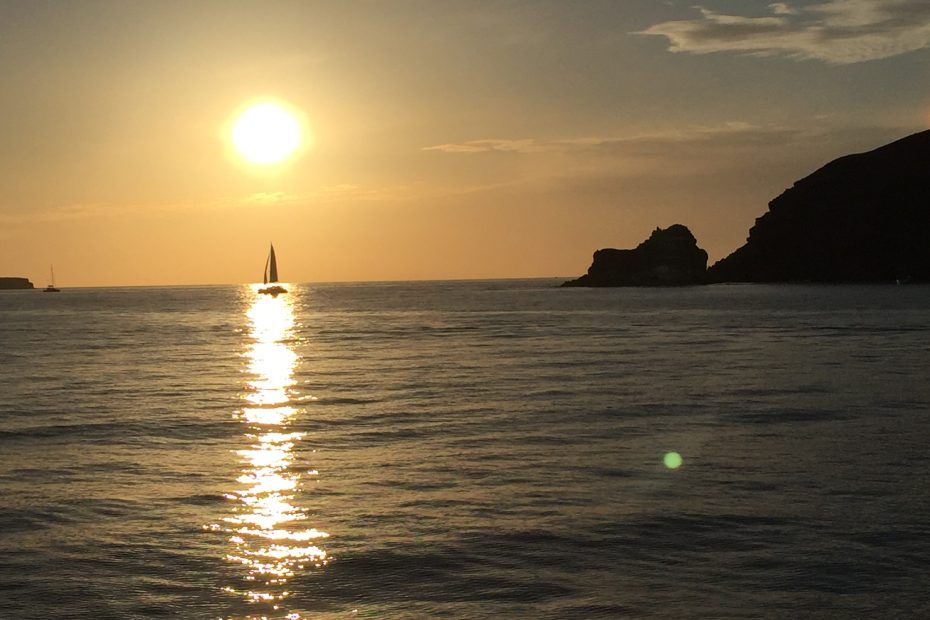 If you’ve been following this space, then you know you can start your year of risks anytime. Today, even. Trying thirty new things is a commitment to adventure rather than a resolution, so you can start any time. Because of the timing of when I read the article that gave me this idea about risks and luck, my year starts on May 1. Last year, I tried twenty-six new things. This year, I tried thirty-four. (More if you count all the new foods and drinks I tried, but I sort of lumped those together.) I didn’t try to hit an average; it just happened that way.

Most of the new things I tried either happened in May of 2019 when I made a bucket list trip to Greece and from November onward when I started actively working to publish my novels. Since my trip to Greece with Insiders Tours was for a writing retreat, most of my risks this year centered around writing. But I didn’t have my fingers glued to the keyboard all the time.

One of the most fun days I spent this past year was on the sea. That’s a surprise because my stomach rolls with the boat from the minute it pushes away from the pier. On this fine day on the Aegean Sea, however, I skipped the seasickness for whatever (happy) reason. We sailed from the new harbor at Fira out into the center of the Santorini caldera on a teak wood sailing ship.

After powering out to the active volcano steaming away in the center of the caldera, we disembarked for a little hike to the top. I learned that sandals are not great footwear for climbing up shale on the sides of a volcano. Beneath our poorly-shod feet, the volcano bubbled and steamed. Its sulfurous scent wafted around us as we traversed a trail that took us directly above the open vent to the magma pools several hundred feet below the calm sea. As we walked over the top of the volcano, I did wonder about the intelligence of such a trek, considering this particular volcano created the second biggest cataclysm in recorded history—and it erupted again as recently as 1776. But the thrill of the opportunity was too much to resist.

One of my goals while we visited Greece was to learn to Greek dance. The last part of this beautiful day on the water included drinking and dancing. Turns out, the steps for Greek dancing are quite easy. They become a challenge, however, on a rocking ship after a few glasses of wine. There was a bit of tripping and much laughter as people of all kinds came together to dance around the bar on the lower deck of the ship. Then the sunset over Oia drew everyone to the main deck again to appreciate the beauty that is Santorini and the Aegean. As breathtaking as the professional photos calendars and post cards are, the sunset view with the naked eye is fifty times as gorgeous.

We toured a couple of wineries, which was something I’d never experienced before. They were as I expected though. Casks of wine, old wine presses, and fields of grape vines. However, on Santorini, the grapes are trained to grow in tight wreaths with the fruit ripening inside them rather than along trellises such as you see in Italy or California. The reason for this is because the winds on Santorini are fierce. Growing the grapes in this way keeps them from succumbing to the weather.

We visited hidden cities and ancient cities only discovered in the last fifty years. The ancient city of Akrotiri that today is only about one third excavated, is what is left after the massive eruption in the middle of the island that created the caldera we sailed over. Plato believed that Atlantis was located on Santorini and sank into the caldera when the volcano erupted. The sophistication of the buildings and art left behind in Akrotiri make a case for his ideas.

An entertainment first I experienced this year was a stadium rock concert. The Rolling Stones wowed a nearly sold-out show at Broncos Stadium at Mile High in August. Their four-story tall video screens flanked by equally tall stacks of amps impressed before Mick, Ronnie, Keith, and Charlie made their way out onto the stage. Mick had his long catwalk out into the fans who paid over $600 each to be that close, and he used every inch of it. A few times, he even shared it with the rest of the band. The stadium was full, the fans were loud, the music was fantastic, and the band used every tactic at their disposal for entertaining us—sound, lights, fireworks. I would attend a stadium show again at the drop of a single drum beat.

Whew! That is scary!

The true risks I took this year all have to do with publishing, launching, and marketing not only my first book, but my first series. As I write this, Prophetess, Book Three of the Talisman Series just released for preorders. Talisman launched in January, and Warrior released in March. Applying for my first copyright, my first ISBN, and my business license terrified me. Seeing the galleys for Talisman, Book One in the series, thrilled me. Putting my book out for reviews nearly paralyzed me. And I won’t lie—that first one star review left a lead weight in my stomach even as it followed a whole list of four and five-star reviews. Learning marketing has been an adventure all by itself, one that I know will require me to work harder than I’ve ever had to work at writing a book. And that’s saying something.

My final risk this year is to create and launch my newsletter rather than leave readers with a blank page on my website. When that goes live, I’ll include a list of all of the new things I tried this year. Perhaps some of them will inspire you in taking your own risks. Perhaps some of them will leave you shaking your head about why they were a risk for me. Perhaps you’ll share what new things you’re trying or have tried that will inspire me.

Yours in taking a risk (or thirty)

Author of the Talisman Series

4 thoughts on “Try Thirty New Things: Risks in the Rearview”