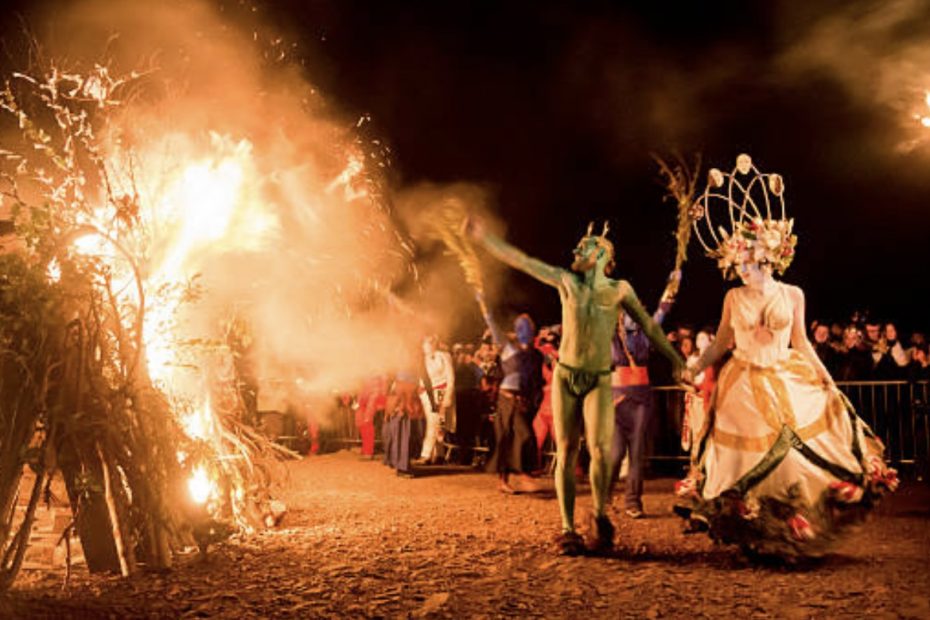 Blessed Beltane to you! I acquired a deep love for all things Celtic when I discovered it was the Celts who told the first stories of King Arthur. All my adult life, I’ve studied the Celts and Celtic mythology. Though I don’t practice Wicca, the religion most often associated with Celtic lore in modern times, I do enjoy some rituals on important feast days. Also known as May Day, May 1 is an important cross-quarter day on the Celtic calendar. And Beltane is so much more than dancing around a May pole.

Beltane translates to “bright fire.” The correct pronunciation is “Byel-teh-neh.” Say the first syllable like a combination of bell and yell, the second with a short ‘e’ as in ted, and the final syllable with another short ‘e’ as in nest. The day is a celebration of fertility of the land, animals—and people. Many of the rituals practiced on this day are about creating new life. The Celts celebrated the mating of Mother Earth and the Greenman, which would result in good weather and fertile land. The Greenman is recognized as the god Cernunnos, “The Horned One,” an important Celtic fertility deity.

In ancient Gaelic times, Beltane was practiced in Scotland, Ireland, and the Isle of Man. Along with Imbolc, Lughnasadh (Lammas), and Samhain, Beltane is recognized as one of the four fire festivals on the wheel of the Celtic calendar. Fire is considered a purifier and healer. On these feast days, especially Samhain and Beltane, the veil between the mortal world and the spirit world is incredibly thin. This means that spirits can visit in forms humans can interact with. During Samhain (November 1), the spirit world often is considered malevolent. The spirits are warded off with candles placed in turnips or pumpkins. During Beltane, however, the spirits are more benevolent. Beltane is a good time to ask the gods for favors.

On May 1, the Celts practiced rituals believed to enhance the fertility of the land, animals, and people. They lit massive bonfires to purify the land in preparation for planting. They pushed cattle between two bonfires set close together to purify the animals. People danced around the fires in joy for the warming of the land and the signs of the earth’s abundance. Trees bud, flowers bloom, insects buzz, baby birds hatch, and woodland creatures return to their summer places. Beltane is about celebrating the light half of the year with positivity, radiance, and abundance.

This feast day is a celebration of life that can’t happen without sexuality. It was common for Celtic people to gather together to celebrate with food, dancing, and pairing up. In pagan times, sex was seen as an avenue to abundance and therefore a cause for celebration. Today, people often leave a May basket on the doorstep of someone whose affection they’d like to have. They also dance around a May pole, which is considered a phallic symbol. A wreath of flowers representing the fertility of the goddess sits atop the pole. Multicolored ribbons extend from the wreath. Young men and women each hold a ribbon and dance around the pole, interweaving the ribbons to eventually create a sheath for the pole. The sheath represents the womb of the earth while the pole penetrates the earth, representing potent blessings from the Greenman.

In Celtic lore, the May Queen fights a never-ending battle with the Queen of Winter for supremacy over the land. On Beltane, the May Queen triumphs and rules uninterrupted until she must yield on Samhain when the Queen of Winter takes over and the cycle begins again. Often on Beltane, a young woman is chosen to represent the May queen. Crowned with her beautiful flower wreath, she presides over the May Day celebrations including the dancing around the May pole. In many places today, especially in Cornwall, Morris dancers parade through village streets, escorting the May Queen to the village green for the day’s celebrations.

Create your own Beltane rituals

There are so many ways to celebrate Beltane. One way is to decorate a May bush. The May bush is usually hawthorn or rowan and decorated with flowers and ribbons in yellow, red, green, white, silver, blue, and pink.. Like a Christmas tree, it’s displayed publicly, usually on one’s doorstep. In ancient times, farmers were known to place May bushes outside barn doors to bring Beltane blessings of an abundance of milk to their livestock. You can make offerings of honey, fruits, oats, milk, and wine to the May Queen and Cernunnos. Or you can start your garden. You can leave a basket of dandelions, primrose, marigolds, and other yellow and orange blooms on your doorstep as a way to invite sunshine and positivity into your home.

The veil between the mortal world and spiritual world being so thin during this time of ripened earth creates an opportunity for practicing divination, fertility rituals, love spells, and sex magic. One way to do this is to cook with aphrodisiacs. Common foods considered aphrodisiacs include artichokes, asparagus, avocados, chocolate, figs, oysters, spicy chili peppers, strawberries, and watermelon.

The important point in creating your own Beltane festival is to focus on the joy and revelry of your ritual. It’s about casting off the darkness of winter and celebrating the coming of the light and warmth of summer. It’s about celebrating fertility, both biological functions and creative energies.

Speaking of creative energies, my Talisman Series of paranormal/fantasy romance books is rooted in Celtic mythology, ritual, and lore. The war goddesses of the Celtic pantheon—the Morrigan, Maeve, and Macha—feature prominently. Other important deities such as Scathach, the warrior trainer, Taranis, the god of weather, Brighid, goddess of storytelling and the hearth, and Anu, the maiden form of the Morrigan, all show up in these books. Monsters and heroes from the Arthurian legends and Celtic mythology also make appearances. Love and battle are the cornerstones of this series, and the next book Rogue is coming June 28, 2022. You can find out more about the series on my website: https://www.tamderudderjackson.com where you can also sign up for my newsletter. All the specifics about joining my ARC team, preorders, and cover reveal are in my newsletter.

Happy Beltane! I hope your ritual is fertile and full of revelry and joy.

Yours in taking a risk (or thirty),